CHAMPION TUDORS: WHERE ARE THEY NOW?

Today is the five-year anniversary of The Tudors lifting the Southern League Premier Division championship trophy after our home game against Chesham United on Monday 21st April 2014, having secured the crown two days previous with a win at Hungerford Town. The Tudors made some fantastic achievements that season – finishing first in the Southern League Premier Division, at that time the highest final league place in our club’s history which (previously the 4th place we finished in the previous season, 2012/13). The average attendance of 549 was at that time the highest on record since Hemel moved to Vauxhall Road in 1972. Hemel FC was in the draw for the first-round proper of the FA Cup for the first time since 1938/39 (albeit we didn’t actually make it to the first round, losing the final qualifying round replay away to Sutton United). The Tudors goal difference of 90 remains the best in the club’s history, beating the previous record of 71 set in our 1999/2000 Isthmian Division Two championship winning season. We played two less games in 1999/2000, but the 2013/14 average winning margin per game (2.05 goals) is still the best in the club’s modern history – we did set higher records back in the Delphian League days, scoring over 90 goals on four occasions between 1933 and 1951 when the seasons only consisted of 26 league games. Likewise, as impressive as scoring 128 goals in 44 league games was this season, it’s only the 23rd best record on our club history! However, you have to compare the better records to the current level of football Hemel are playing at – the average of 2.9 goals per game in 2013/14’s Southern League Premier Division is a far greater achievement to the days when Hemel were averaging 4 goals per game in the Spartan League in the 1920’s! In terms of our club playing at a respected level of football, 2013/14’s goal scoring feats have been the best.

Ben Mackey became the new record goal scorer, netting 43 in all competitions and overtaking the previous record of 41 held by Anthony Thomas. The strike partnership of Ben Mackey and Lewis Toomey scored 74 goals between them in all competitions, overtaking the previous record of 69 goals scored by Anthony Thomas and Gary Sippetts in 2006/07. For goals conceded, the 2013/14 average of 0.9 per game is the third best in our clubs history – following 0.7 in 1997/98 and 0.6 in 1999/2000. Hemel kept 19 clean sheets in the league, second best to 21 in 1999/2000, however Laurie Walker has set a new record by keeping all of those clean sheets himself. In 1999/2000 the 21 clean sheets were kept by three different ‘keepers: Tamer Fernandes (6), Darren Bonfield (6) and Julian Gjeloshi (9). The previous record for most clean sheets by a single ‘keeper in one season was Simon Sheppard’s 15 in 1997/98.

Hemel also set some Southern League Records (records only dating back to when the league started to award three points for a win): Hemel’s points per game average of 2.32 has only ever been bettered twice, in 1985/86 by Welling United (2.45) and in 1989/90 by Dover Athletic (2.43). Hemel’s amazing goal difference of 90 is the best Southern League record, beating the previous record by 26 goals. (Welling United, 64 in 1985/86. Obviously, we play more league games than previous Southern League clubs had to, but if you work out the goal difference by the average winning margin per game – 2.05 goals – it’s still the best record by far. Although Hemel had a great season defensively, our 38 goals conceded is only the 15th best record in Southern League history. Our 128 is the most ever Southern League goals scored, The Tudors also had the highest ever goal scoring rate when rate when worked out by average goals scored per game (2.9).

So, five years on from The Tudors record breaking Southern League Premier Division championship winning season, we catch up with what the squad is up to now…

If any players want to correct or update information featured, please email info@hemelfans.co.uk or tweet @TudorsClub

Laurie Walker: 54 appearances in 2013/14. Laurie is currently in his second spell at Hemel. Laurie departed Vauxhall Road in the summer of 2015 for league rivals Oxford City, where he spent one year before heading to National League North Brackley. After one season up there, Laurie returned to Vauxhall Road in 2017 and is now nearing the 200 appearances milestone. Laurie is a favourite of the fans and has picked up more fans player of the month awards than any other player.

Moussa Diarra: 46 appearances (6 as sub), 3 goals. Currently with Dover Athletic in the Vanarama National. Arguably the most popular Tudors player in recent years, The Mouss departed Vauxhall Road for Hampton & Richmond in 2014/15 before earning a move the National League Barrow. Diarra transferred to Dover in the summer of 2018.

David King: 43 appearances (3 as sub), 2 goals. Unknown if Kingy is still playing. His Tudors career was interrupted by injuries, but he still made 21 appearances in Hemel’s first season in the National League South before departing for Oxford in the summer of 2015. A year later he returned to Vauxhall Road and made a handful of appearances before leaving again.

Shane Blackett: 15 appearances (1 as sub), 2 goals. Unknown if Shane is still playing. He signed midway through Hemel’s championship season, contributing with 15 appearances at the back. In the summer of 2014, he moved on to Dunstable Town, where he remained before leaving for St Neots during the 2015/16 season. 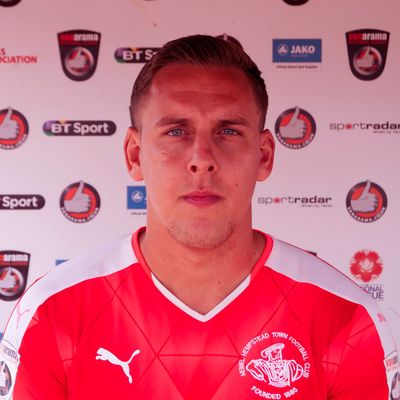 Ollie Thorne: 45 appearances (4 as sub), 5 goals. Currently at Cambridge City in the Southern League, Division One Central. With 20 clubs to his name (with multiple spells as some of them) Ollie is quite the journeyman, however he is still spoken about by Hemel fans as the type of player we’d love to see back in the team. After 14 appearances in 2014/15 he departed for St Neots, but he returned in 2015/16 and remained at Hemel until midway through the 2016/17 season, capping his Tudors career with a memorable performance away to St Albans City which included scoring a late equaliser.

David Pearce: 56 appearances, 14 goals (one hat-trick). Currently in his second spell at Chesham United in the Southern League Premier Division South. “The White Pele” was Hemel’s longest serving player during the championship winning season, having joined three seasons previous. Dave was an immensely popular player, winning the supporters player of the year a few times, making in excess of 100 appearances and also scoring prolifically for The Tudors. Dave left for Chesham in 2014/15 and during the last five seasons spent a season at Oxford City in the National League South.

Danny Talbot: 58 appearances, 6 goals (one hat-trick). Currently at Hitchin Town in the Southern League Premier Division Central. Danny was in his second season at Vauxhall Road when we won the league championship. Despite impressing for Hemel in the Conf South, he opted for a move back to Chesham United (where he had joined the Tudors from in 2013) midway through 2014/15 then went on to finish that season with Dunstable Town. After further spells at Chesham and Barton Rovers, Danny is currently with Hitchin.

David Hutton: 53 appearances (16 as sub), 11 goals (one hat-trick). unknown if David currently playing. David was in his second season at Hemel when we won the championship, a popular player who was a bit of a baller… it was a surprise to fans that he was released during the opening stages of 2014/15 where he has since gone on to bit a bit of a journeyman – platting for Dunstable Town, St. Neots Town, Biggleswade Town, Bishop’s Stortford, Kings Langley, Chesham United (two spells) and Hayes & Yeading United.

Jordan Parkes: 53 appearances (8 as sub), 24 goals (three hat-tricks). Currently in his second spell at Hemel. Captain Parkesy was The Tudors top scorer in our first season in the National League South and left Vauxhall Road for Ebbsfleet in the summer of 2015. The following year, Parkes returned to Hemel and has since made his 200th appearance and has now well passed 100 goals, having recently broke the clubs all time highest scoring record.

Luke Allen: 27 appearances (10 as sub), 4 goals. Currently with Braintree Town in the National League. Luke joined Hemel from Cambridge City midway through our championship winning season. The following season he joined Chesham United on loan before moving permanently to St Albans City. Luke had a spell at Tonbridge before joining Braintree last season as they earned promotion from the National League South. 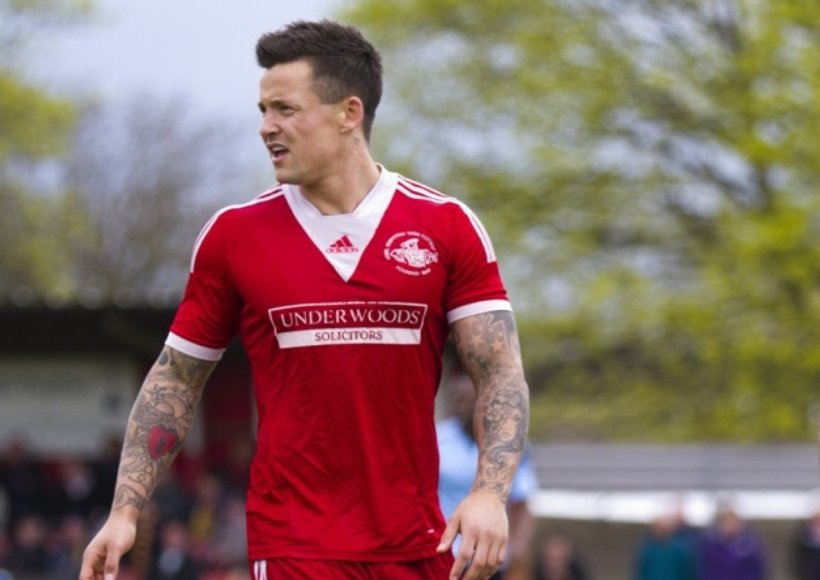 Ben Mackey: 52 appearances, 43 goals (five hat-tricks). Currently playing for Racing Club Warwick in the Midland League Division One. “The Unit” was massively prolific for Hemel, notching 43 goals in all competitions in 2013/14. After a stuttered start to our first season in the Conf South, Ben joined Dunstable on loan then St Neots permanently. The following year he joined Leamington where he found his shooting boots again, and after a more recent move to he is on a fantastic run of form, notching in excess of 30 goals this season for Warwick.

Lewis Toomey: 45 appearances (7 as sub), 31 goals (one hat-trick). Currently at Hendon in the Southern League Premier Division South. Lewis re-joined Hemel at the start of the championship winning season, having previoisly played for The Tudors in 2011/12. Having scored prolifically for St Alban’s and Hitchin Town, he sustained his good form at Vauxhall Road and scored 31 goals in all competitions. Midway through 2014/15, Lewis left for Boreham Wood, then went on to play for Kings Langley, Chesham United, Hayes & Yeading United and now Hendon.

Charlie Mpi: 39 appearances (34 as sub), 13 goals. Currently playing for DHL Dragons in the Dubai Amateur Football League. Charlie was a super-sub during Hemel’s championship winning season, scoring 13 goals all after coming off the bench – those stats are not an error… Charlie made an astonishing 34 of his 39 appearances as a substitute!

Oliver Hawkins: 32 appearances (20 as sub), 6 goals. Currently with Portsmouth in League One, he recently scored the winning penalty for Pompey at Wembley in the final of the Checkatrade Trophy. After this season, Ollie went on to score prolifically for The Tudors and earned a transfer to League Two Dagenham & Redbridge. Subsequently relegated with the Daggers to the National League, Ollie continued to impress and transferred to Portsmouth, where he has to date scored 14 goals in 65 games. Ollie also notched January 2018’s Goal of the Month.

Dean Brennan and Stuart Maynard: The management team led The Tudors for well over 300 games, achieving many clubs records and successes on the way. During the early stages of the 2018/19 season they parted company with Hemel after six years at Vauxhall Road, heading to fellow National League South club Billericay Town. With circumstances that everyone (except Dean and Stuart, apparently) saw coming… their reign at Cirque du Ricay was brought to an abrupt end by the man in charge down there but they quickly found a new role at Kingstonian in the Isthmian League Premier Division. The spell at Kingstonian was also short lived; whilst Dean and Stuart are currently out of the game, the Tudor Army wishes them well and we hope to see them back in charge somewhere very soon.

This site uses Akismet to reduce spam. Learn how your comment data is processed.